Be sure to only buy the freshest tuna you can from a reputable fishmonger. If available, ahi tuna is the best quality. Served with this slaw, it makes for a very sophisticated dish. Jicama is a white-fleshed root vegetable, also known as a Mexican potato. It is crunchy and sweet, and can be eaten either raw or cooked. It’s usually available from May to November; if unavailable, use canned sliced water chestnuts.

RECIPE INSTRUCTIONS
1. Make the slaw by combining the mango, fennel, jicama, red and green peppers, carrot, green onions and cilantro in a medium bowl. In a separate bowl, whisk together the olive oil, lemon juice, rice vinegar, 1 tsp sesame seeds, garlic and chili sauce. Pour over the slaw and toss to combine. Place on a serving platter.

2. Lightly coat a nonstick grill pan with cooking spray and set over high heat. Sprinkle the tuna with salt and pepper and sear for about 2 minutes per side; the center should still be raw. Remove from the heat. Slice thinly and top with the slaw.

3. Prepare glaze if desired. Combine the soy sauce, maple syrup and cornstarch in a small saucepan. Bring to a boil, reduce the heat and simmer, whisking, until the cornstarch is dis¬solved and the mixture is slightly thickened. Pour over the tuna. Garnish with 1 tsp sesame seeds before serving.

Make Ahead: Prepare the salsa early in the day, keeping refrigerated.

Nutrition Watch: A cup of jicama has almost 6 g of fiber and only 50 calories. It is also high in vitamin C, potassium and folate. 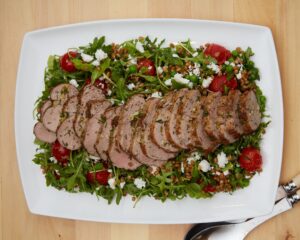 Pork Tenderloin with Dill Crust Over Farro, Peas, and Tomatoes 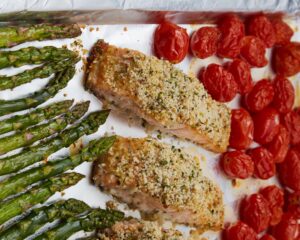 Rose Reisman is a leading health expert, published author and nutritionist. Rose aims to share her wealth of knowledge with every and anything to do with healthy eating and living well. Follow Rose’s Social Channels @RoseReisman